The President and Vice-President of the Methodist Conference have made the following statement in response to the announcement of the death of Her Majesty, Queen Elizabeth II.

“It was with profound sadness that we learned of the death of Her Majesty the Queen today. We join the nation in grief and thank God for her long and distinguished reign. The loyalty to, and love expressed, for Queen Elizabeth across the world is a testament to the life that she led, one marked by dedicated service to others. She provided encouragement and reassurance to a world living through uncertain times.

“For people of all ages the Queen has provided constancy, a calm and wise influence at all levels of society. Our nation, the Commonwealth and the world have been greatly blessed by her life and work.

“We give thanks to God that her duty as monarch was grounded in a deep faith in Jesus Christ, which has been an inspiration to countless people throughout her reign. Her dedication, commitment and service to her people will never be forgotten and will sustain all those who mourn in the coming weeks. Our prayers are for her family who have lost a mother, grandmother, great-grandmother and aunt and we pray that all may be inspired by her service and guided by her example.

“The prayers of the Methodist people are also offered for His Majesty the King in his new role.”

The Revd Graham Thompson and Anthony Boateng, President and Vice-President of the Methodist Conference. 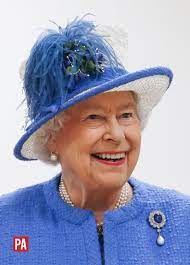 A prayer on the death of Her Majesty the Queen

Creator God,
We give thanks for the life of Her Most Gracious Majesty, Queen Elizabeth II.
We honour her life of service built on a firm foundation of faith and an exemplary commitment to duty.
Comfort those who mourn and bring peace to those in distress.
We offer our prayer in the name of Jesus Christ our Saviour.
Amen.

This website uses cookies to improve your experience while you navigate through the website. Out of these cookies, the cookies that are categorized as necessary are stored on your browser as they are essential for the working of basic functionalities of the website. We also use third-party cookies that help us analyze and understand how you use this website. These cookies will be stored in your browser only with your consent. You also have the option to opt-out of these cookies. But opting out of some of these cookies may have an effect on your browsing experience.
Necessary Always Enabled
Necessary cookies are absolutely essential for the website to function properly. This category only includes cookies that ensures basic functionalities and security features of the website. These cookies do not store any personal information.
Non-necessary
Any cookies that may not be particularly necessary for the website to function and is used specifically to collect user personal data via analytics, ads, other embedded contents are termed as non-necessary cookies. It is mandatory to procure user consent prior to running these cookies on your website.
SAVE & ACCEPT